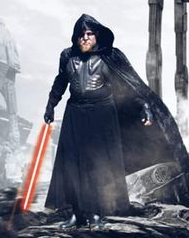 TattedSith has been cosplaying since early 2019. Since then he has won several judges-choice awards, 1st place in the Novice Class Cosplay contest at Tulkon, and 2nd place in his first Masters Class Cosplay contest this past year at OkiCon. He has emceed a few shows for Oklahoma City’s Pop Culture Con events and aspires to do more. He is most known for his OC (Original Character) Sith Lord as well as his Pyramid Head cosplays. He has several big builds in the works currently as well. He also has a YouTube channel for gaming. Aside from cosplaying, he is an aspiring voice actor, writes his own songs, and on top of it all has started his own charity, “Funds For Small Heroes.” It focuses on raising funds for the local children’s hospital in Tulsa to help pay for medical equipment, treatments, bills, and expenses.

With such an expanded canon, the Star Wars franchise can be intimidating to newcomers interested in joining in and geeking out. Punch it on into the Star Wars universe.

Want to join the cosplay craze, but can't find the right character that fits your personality? Create your own original character! Pick a name, develop your story, and design your costume. The options are limitless! Panelists discuss designing an OC cosplay concept.

What are the social and mental-health benefits of cosplay? We discuss the psychology behind character development and various sociological elements of cosplay, emphasizing why we choose to be someone or something else.

Little touches can make a costume. There's a lot more than your garment when it comes to finishing your cosplay, but you can do it! Shoes, wigs, make-up, props—come learn to embellish your favorite costume for a fully polished LOOK.

Funny folks with various levels of Pokémon knowledge guess the silhouettes or make stuff up! Can you guess who's that Pokémon? Panelist and audience participation encouraged!