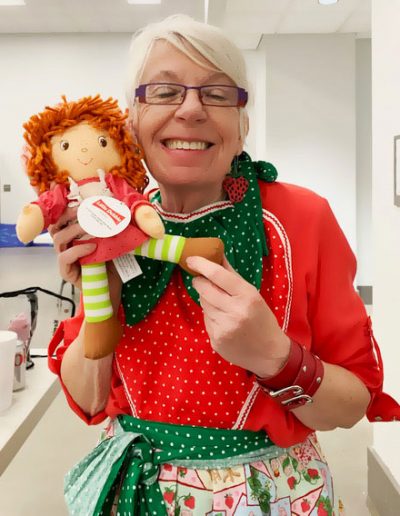 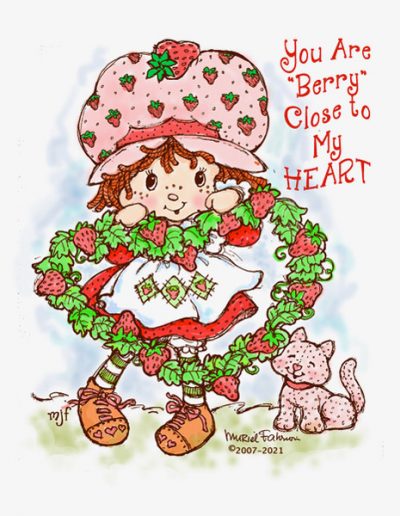 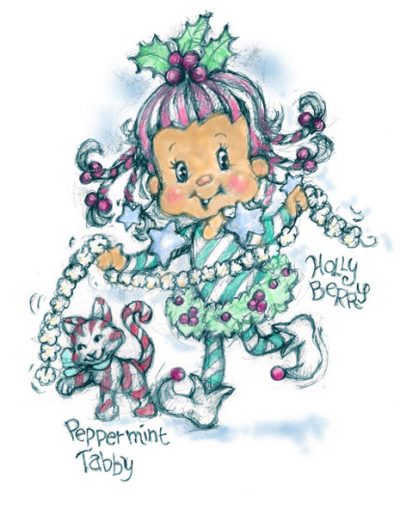 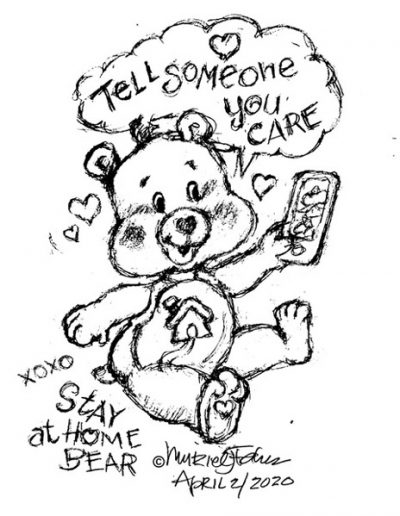 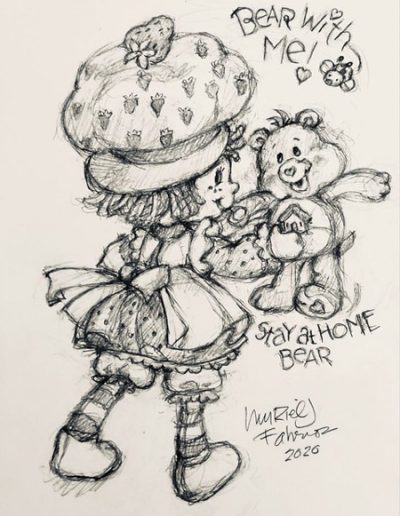 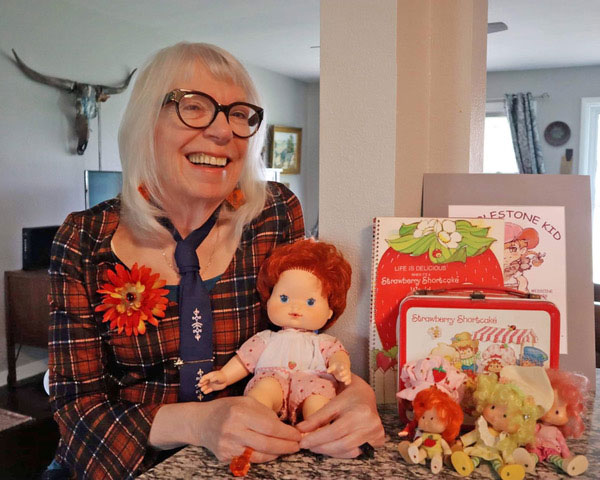 Muriel Fahrion was born in Cleveland OH, the third of seven children. Her bus-driver father ended up a VP of Eastern Greyhound. Mother was a full-time mom with part-time jobs. Fun was always homegrown, with plenty of make-it-yourself fun requiring imagination and resourcefulness.

Muriel took every free art class available as a child, starting at the age of four, including classes at the Cleveland Museum of Art along with older sister, Susan (who is also a career artist).

She received a scholarship to Cooper School of Art in Cleveland, OH. Following graduation, she joined American Greeting as a card designer. It was only after a number of years and hundreds of card designs in the Humorous Concept department that in 1977 she developed the first concept artwork for the classic Strawberry Shortcake and her cat Custard, originally created for a group of greeting cards. The Shortcake character was then presented to General Mills for toy, animation, and licensing possibilities. Shortly afterwards, Muriel joined Those Characters from Cleveland (TCFC), a licensing and toy think tank and subsidiary of American Greetings. Along with a creative team of writers and art directors, she developed another 38 characters for the Strawberry line, followed by the Care Bears and the concept drawings which became The Get Along Gang TV cartoon show.

In 1984, she formed Fahrion Studios with her husband Michael, a freelance designer. They did 2-D work for Fisher-Price’s Puffalumps and Smooshees, with freelance work for Disney and Warner Brothers. At night, they team-taught computer graphics as faculty members of the Cleveland Institute of Art. Muriel created her own line, Cameow Cats, which was not released. Unlike the lines she did for TCFC, she retained the copyrights.

During these years they raised one son, Colin (now an artist/website designer in San Francisco), and adopted a daughter, Kimberly (a teacher in the Tulsa area). By 1992 the toy industry had slowed, and Those Characters merged back into AG corporate. They left Cleveland to find work more suited to Muriel’s experience. In Chicago, she worked as senior art director at Enesco Giftware. She became dissatisfied with management and looked for a company where she could make more of a difference. This career move in 1995 landed the family in Oklahoma. Her husband worked freelance and Muriel became creative director of United Design, a giftware company founded by Gary & Jeanie Clinton of Noble, OK. She rose to Creative VP over artists and sculptors both in-house and freelance, and traveled internationally working with factories in production.

Meanwhile, Muriel created a series called “The Exhausted Woman,” art and poetry that she self published in 2021, as well as a grouping named Raggy Mae and the Raggedy Ranch after they visited New Mexico.

In their leisure time they traveled around Oklahoma for discovery and antiquing. On one of their excursions, they fell in love with the Wichita Mountains area and decided to build a home in historic, scenic Medicine Park. United Design came under different management and sent their design work abroad. In 2002, they made Medicine Park their permanent home. She and her husband Michael founded Big Rock Works Design, creating personal art, websites, and commercial artwork in their mountain-bungalow studio.

Muriel taught herself 3-D rendering and animation and created the character lil iffi. She had her own internet page and was featured in print for a children’s magazine. She also created 3-D SPRITES and designed Skamper the Prairie Dog as a fundraiser for the Cancer Center of Lawton, OK, and Mz. Razz for a local gift store, Salon.

Dramatic change happened in 2010 when her husband was diagnosed with Stage IV non-Hodgkin’s lymphoma. After a few good years, they moved closer to doctors, and caretaking became Muriel’s main focus. They moved to Tulsa in 2016. Michael passed in 2018.

In 2019, Muriel relaunched her career under the name Outta Thin Air Studio. She concentrated on social media to encourage sales on her site. It has worked.

She kept creating original characters including RainBerry Jam, Holly Berry, and Punkin’ Spice — playing off the Shortcake line. Others include Cassandra the Veranda Panda, Hello Cupcake, and Giggle the Guardian Angel of Laughter.

She has done numerous cons in Oklahoma, Denver Retro Con, and appeared at Big Bad Con, a gaming con in San Francisco.

This year, she revived the Strawberry Shortcake line, depicting the characters as she would draw them today. Muriel works from her home studio in Tulsa with her manic Welsh Terrier, and one day a week in Beggs, OK as artist-in-residence at a leather studio.

Autograph by Muriel will be $5 for up to two items. Limit two personal collectibles signed/person max, please.
Selfies will be $5. 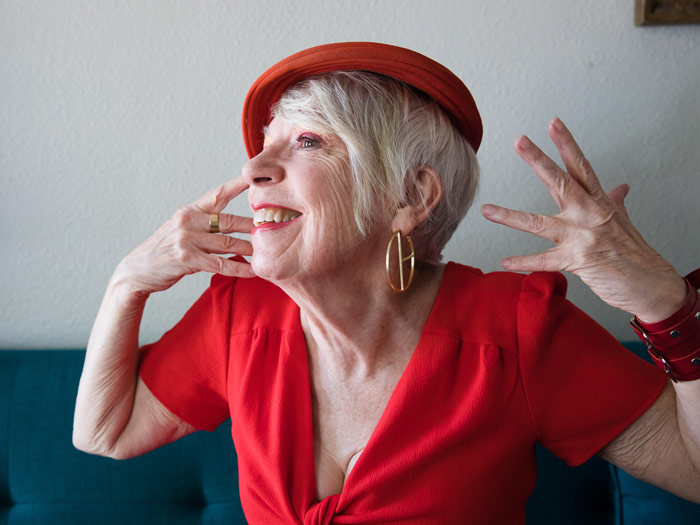 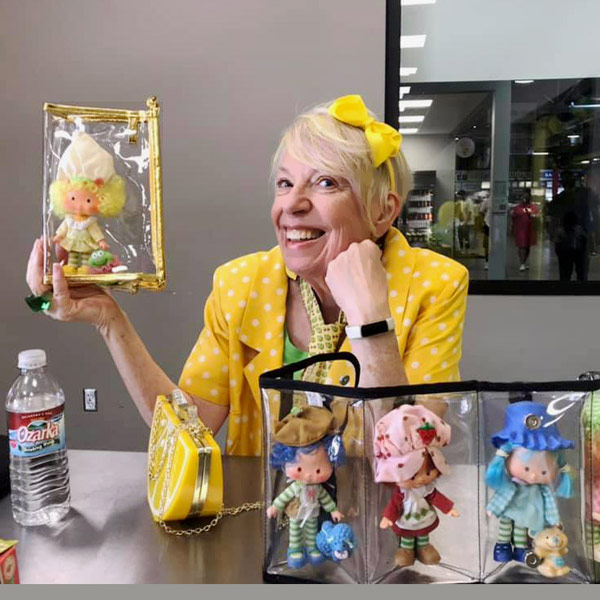 How Many Hats Can I Wear in a Day's Work?

Time management can be the key to finding peace in hobbies, projects, and your work/life balance. This panel discusses various methods of organizing your time, knowing the warning signs of burnout, and learning how not to fade away.

You're never too old or too young to find your art bliss! Art can be therapy, art can be a business, or art can just be art! Let's talk about how we can find this bliss and how to sustain it so it serves us and fulfills our lives.

Shortcake + Me: Q&A with Muriel Fahrion

Let's dance on it! Join artist, poet, creator and Instagram dance sensation Muriel Fahrion to bust some moves and clear your head space in this judgment-free joy zone.